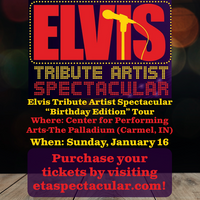 THE ELVIS TRIBUTE ARTIST SPECTACULAR Birthday Edition is an Era-by-Era tribute concert celebrating the music and magic of Elvis Presley. The concert begins with the early rock-a-billy, the military years, the movie years, the ’68 comeback special in black leather and the show closes with the Las Vegas concert years.

SHAWN KLUSH Shawn was named the first ever Ultimate Elvis Tribute Artist by Elvis Presley Enterprises and was named the World’s Greatest Elvis by the BBC1 in London. Shawn brings all the Electrifying magic of Elvis to the stage. Shawn is “The Closest Thing to the King in Concert.”

RYAN PELTON Back by Popular demand. Ryan Pelton is an international award winning ETA. Ryan played the lead Lead role in the movie “The Identical” There can be no doubt that Ryan is the rarest kind of performer – living up to his billing time and time again.

SPECIAL GUESTS: The Blackwood Quartet: Eight time Grammy award winning vocal group. They have been inducted into the “Gospel Music Hall of Fame

All Backed by THE FABULOUS AMBASSADORS & The Nashville Dreams